My work this semester consisted in creating  an acoustic musical work for Soprano and 7 Instruments (piccolo, alto flute, harp, piano, celesta, percussion, and violin), where the underlying logico-structural and pre-compositional work was rooted within Stephen Wolfram’s research in cellular automata as presented in his influential book “A New Kind of Science”.

More concretely, the different elementary 2-color cellular automata and their respective generative rules (five were used in total throughout the work, viz. #18, #34, #50, #54, and #102) determined both large structural divisions (mostly concerning harmonic and rhythmic density), as well as informed the rhythmic and pitch choices on a microscopic level.

Below is shown the evolution from the simple initial condition for rule #54 which was used almost verbatim in mm. 69 – 80 of my piece.

After the initial stage of conceptually choosing rules which would satisfy a musical logic founded upon diversity of material, I imputed their algebraic forms into PWGL software in order to generate the desired automata. Having determined earlier in the semester that despite its limitations, a direct binary reading/translation of the data would prove advantageous as long as many such rules were simultaneously used in nested configurations, the next stage consisted in carefully and intuitively planning the timing and sectionalization of the different rules.

During this stage it was made clear that any simple automata would prove useful only as long as I did intervene, re-translate and necessarily adjust the data according to instrumental-practical needs. Only in the last stage of the work, musical-expressive elements and further adjustments were made without compromising the DNA of the previously generated structures.

In conclusion, the role of the composer was twofold : 1. Define the bounds of the system by implementing and translating simple algorithmic rules into pitches, rhythms, texture, timbre etc.  2. Intuitively intervene on a surface level to ensure a musically expressive work. 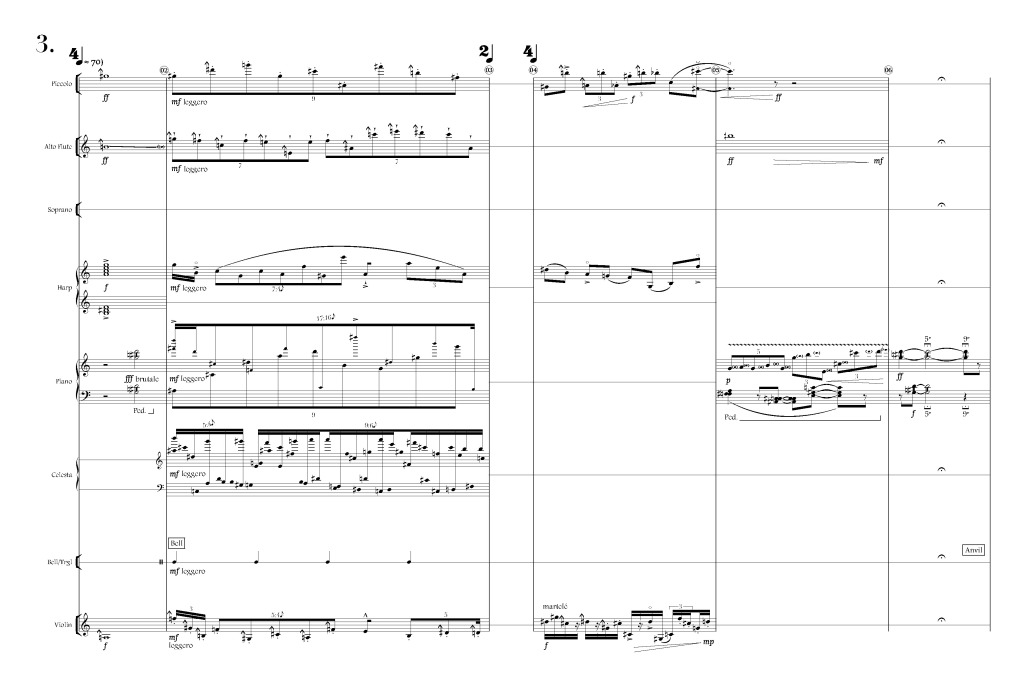 First page of the piece: An alternation between rules #34 and #102