My progress on Backroads has been mainly in the piece itself, particularly on one 10-minute section of the piece, and on my Artist Framework document.

Regarding the piece itself, most of my time has been spent on a section of the piece that is one continuous shot of driving back roads at night. This shot is the most heavily modified video and audio of the work, and the shaky conceptual grounds for doing this processing has caused me significant difficulty for getting to a close-to-final draft of this section. Eventually, I decided to go with one set of effects for the entire duration of the section that don’t change. This is much more like the way I treat the video in all the other sections of the work, so it makes more sense for the Dark Roads section. Here are some stills from the section as it currently stands. 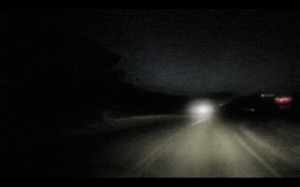 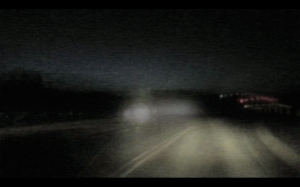 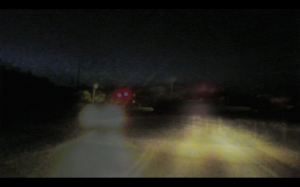 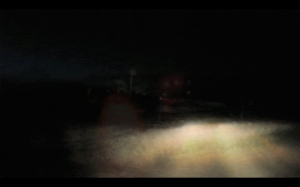 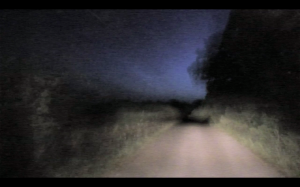 One other significant evolution in my working on the piece is the creation of multiple transition sections. These sections include very quiet audio juxtaposed against blacked or against a barely visible silhouetted driving shot. These sections, including the introduction of the piece, are meant to draw the audience into my visual and sonic world while shifting their focus to their own perception. By giving the audience only the barely perceptible and barely visible, their viewing and listening will automatically sharpen, thereby framing the more everyday driving sound and image with more than just an everyday perceptual lens. Here are some examples of silhouetted shots from the introduction. (They are intended to be almost too dark to be visible, so they may not be very visible, depending on your monitor.) 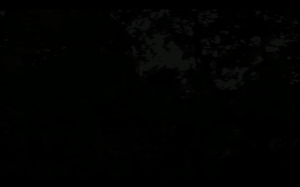 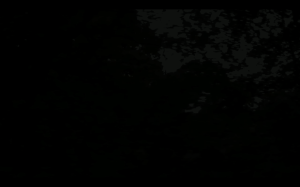 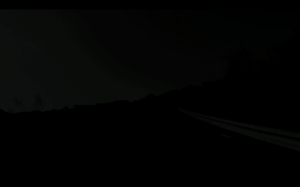 Regarding my Artist Framework, the investigation into my practice and the conceptual basis for it has basically evolved into a preliminary form of my written dissertation. For example, for writing about my working process specifically I decided to go into extreme detail regarding each musical parameter in a given situation. While most of the framework document regards very broad aspects of working as an artist, such as my influences or my place in the world, I’ve decided to also get down to the nitty gritty specifics in order to get the most out of my time. My Framework will end up being a Presi document with maps created in Ilustrator as well as an abbreviated 5 page document, but that is all with the goal in mind of creating a 20-25 page document that is much more thorough as well as broad in scope. Here is a sample from my current draft of my Artist Framework regarding my working process:

Most of my treatment of individual parameters is formed by the extremely focused mode of listening that I seek to evoke in the audience.

Development -> The element of progression or change of musical material tends to be on a much smaller scale than in classical Western art music, furthermore, the timing of this progression can range from constantly changing very slightly to suddenly changing very dramatically. However, the changes in my music rarely reach the same scale as that of say, Schoenberg, and those who are in his musical lineage. The development that happens in my work is usually slow, deliberate, subtle and structurally relevant. The image below illustrates how I inhabit a different area of the spectrum of development than most composers in the realm of Western Art music.

Amplitude -> My work can range from 10dB to 95dB while most art music, rock music, etc. ranges from 85dB to 120dB. This generally quite quiet range of amplitude is in the lineage of the composers John Cage, who opened the field of music to include environmental sound as valid musical material, and Morton Feldman, who instructed all of his music to be performed quietly so that audiences would be drawn in more. I desire to draw listeners into my work with acoustically unimposing, dynamically subtle work that you have to listen to intentionally in order to hear the full range of. The image below shows how I choose to emphasize a different range of amplitude in my work than that of Rock music or Western Art music.