But, as they work, journalists and writers make myriad choices about how to convey meaning. They do this by choosing an “angle.” The same event, like a child starving in the street, looks very different from the window above, from across town square, and from the eyes of the mother who is too weak to help him. Stories can be told from all angles. Journalistic framing is based on the idea that, “in storytelling, communicators can select from a plurality of interpretations,” (Nisbet, 2010.)

Let’s look at an example of drafting, changing words, choosing the right order: How does a writer’s mind work?

So, now let’s ask: What is the probability that one word will be chosen over another?

A bit about Probability & Markov Chains:

Shannon complicates the question further by looking at the probability that an A will follow a C or a B will follow an A. He continues with this experiment, playing with the probabilities that letters will occur, especially when they are dependent upon the letter before them, or several letters before them (first, second, third-order, etc.).

Let’s look closely at the example of a telegraph, a system where either a dot, a dash (2 possible letter states) and a space are the 3 possibilities:

A bit more about Shannon’s theory. 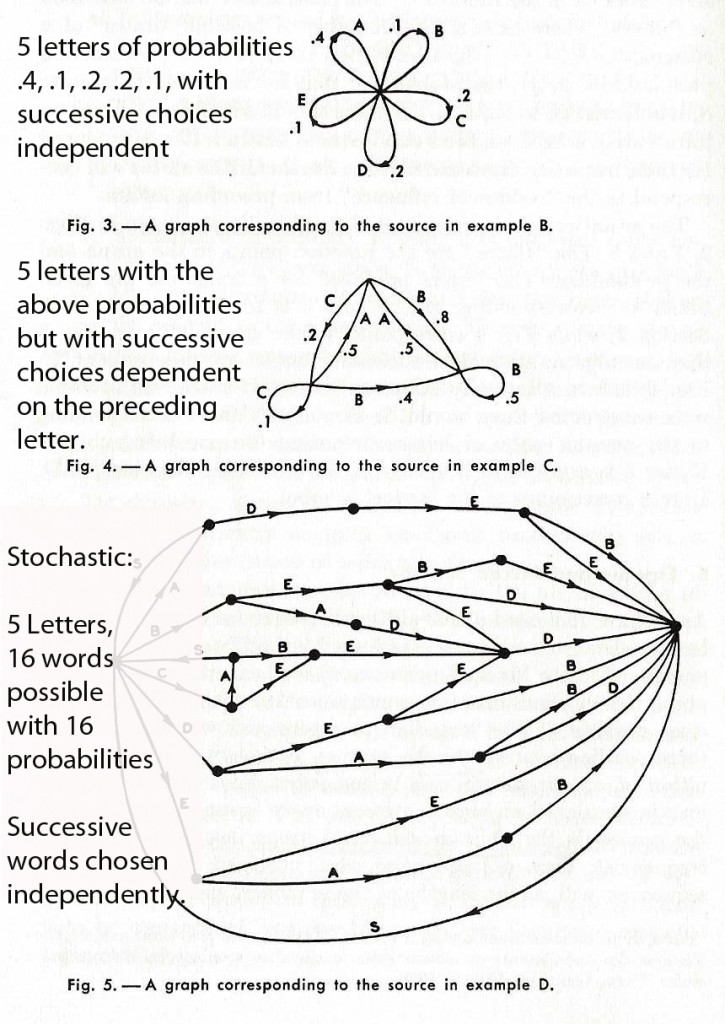 Shannon went on to revolutionize information communication technologies like modems through his mathematical theorems for how best to encrypt, condense, and send information (a series of symbols/letters) over a channel in the most efficient manner possible.

An optimal channel capacity has been the holy grail of modem design for the last 50 years, says the author of an introduction to a re-print of Shannon’s book: “Without the guidance of Shannon’s capacity formula, modem designers would have stumbled more often and proceeded more slowly. Communication systems ranging from deep-space satellite links to storage devices such as magnetic tapes and ubiquitous compact disks, and from high-speed internets to broadcast high-definition television, came sooner and in better form because of his work” (Blahut & Hajek, 1998).

This project is a literature review and exploratory diagramming project which attempts to place the information communication system above within a broader context of information in the world, examining the interconnected ways in which these systems work and finding the related architectures, flows, challenges, metaphors, and mathematics that can describe the larger system as well as its parts. For instance, when a human brain creates information, Shannon’s system moves it from sender to receiver, and then the human brain receiving it processes the information. What is the likelihood of noise in that system if taken as a whole?

If metaphors (as well as journalistic framing) are a mapping from one cognitive domain to another, the connection is between two embodied minds – one on the sending end and one on the receiving end. The communication is carried out via symbols which obtain meaning by their use in a particular “order”. How can noise be kept out of the information mapping channel between journalists and the public? What causes noise in that mapping system?

How do journalists deal with being a mediation device between information and people? How does objectivity factor in to the cognitive system in which they work and how does it affect the people for whom they publish? How does information purporting to be objective and free from any noise affect subjective, human audiences who are not bound to objective thinking, involved in a process of highly subjective and individualistic information processing? Can the transmission of one information article be examined for its resemblance to the truth of an event?