Le’s work was chosen last June as part of a curated exhibition installed throughout the Mercedes-Benz Business Center Operations facility in Fort Worth. At the end of each year’s exhibition, judges vote on the top six artists, who each receive their part of the $20,000 cash awards. 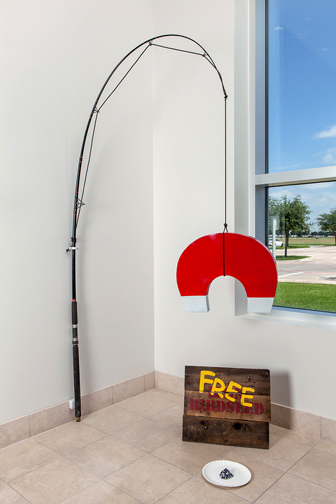 Duoc Le’s “ACME: Iron Birdseed” is one of his three pieces exhibited at the Mercedes-Benz Business Center Operations facility in Fort Worth. Among 100 other works, Le’s three were chosen for the $5,000 award.

“It is always great to make art and get recognized. It helps get your name out there, helps you find commissioned work, and helps get your work shown more widely,” Le says. Le graduated from Texas Christian University in May 2014, and he is currently a graduate student in sculpture at the College of Visual Arts and Design at UNT.

His winning work this year includes three sculptures that are appropriations of classic cartoon inventions and contraptions drawn from the ACME Loony Toons cartoons. For example, he crafted a bullet that shoots a flag with “Bang!” printed on it, and a booby-trapped magnet and plate of metal seeds like the one Wile E. Coyote might use to catch the Roadrunner.

From his artist’s statement: “In real life there is no logical way these machines can function properly, but their absurdity has a magnetic presence. By recreating them in three dimensions, I contradict cartoon logic. My mixing of worlds calls into question what is possible and how the impossible may function in our everyday lives.”

Le works at xREZ as a fabrication and production assistant, and he plans to graduate from the College of Visual Arts and Design in 2017. His work will be on display at the MBFS facility through the fall winners’ reception.

The Mercedes-Benz Financial Services Experiencing Perspectives awards are given in cooperation with Southern Methodist University and Texas Christian University to students, faculty, and alumni artists of those schools. Le has shown in the competitive exhibition since 2013 and plans to re-apply again for next year’s show.

Read the award announcement for Duoc Le and the other MBFS winners in the Dallas Morning News article.