xREZ Art + Science Lab member Amelia Jaycen’s energy story, “Price of Power” was published Sunday, May 24 in the Denton Record-Chronicle. The page one feature digs into the history of Denton’s municipally-owned electric utility and the science behind its coal-fired power plant built in 1973, which the city is still using today to produce electricity. From the story: 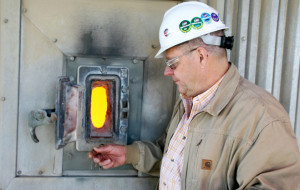 Director of the Gibbons Creek Steam Electric Station, Craig York, on the 17th story of the power plant.

The control room on top of the plant is aglow with computer screens where workers in overalls press buttons to control feeders, fans and flow rates, and monitor the behavior of the fireball inside the boiler. Good behavior is determined by how much and what form of sulfur, carbon, mercury, nitrogen, particulates and other contaminates the burning coal produces. “All this is just a giant chemistry experiment,” said Jan Horbaczewski, the plant’s regulatory compliance officer, noting “it’s not always easy” to comply with increasingly stringent federal emission regulations.

Read the full story at the Denton Record-Chronicle: “The Price of Power”